Evaluative language in pro-vivisection letters to the editor in The Times between 1875 and 1884 : The influence of Cruelty to animals Act 1876 on what is evaluated and how

Evaluative language in pro-vivisection letters to the editor in The Times between 1875 and 1884 : The influence of Cruelty to animals Act 1876 on what is evaluated and how 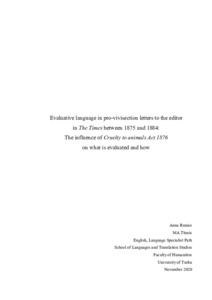 The objective of this thesis is to examine the use of evaluative language in texts that in one way or another defend vivisection. The primary material consists of 33 letters to the editor published in The Times between 1875 and 1884. The aim is to find out what and who are evaluated when vivisection is defended, and what type of evaluations are utilised. Furthermore, changes in the evaluative language between the letters published before and after the Cruelty to Animals Act 1876 are looked into, in order to find out whether the Act had influence on people´s attitudes concerning animal experimentation and thus the evaluative language used in the letters.

To investigate the evaluative language in the letters, appraisal theory (Martin and White 2005), a lexis-oriented classification system for analysing evaluations, is used. The framework is divided into three subtypes of Appraisal, but in this thesis, the focus is on Attitude, which deals with the actual feelings and opinions conveyed in texts. Attitude is further divided into Judgement, Appreciation and Affect, along with their subcategories. Besides the Attitude subtypes, the evaluations in the letters are categorised according to their target, valence and explicitness. The data are analysed both qualitatively and quantitatively.

Summarising the most relevant changes in the evaluative language and connecting them to vivisection itself, it can be concluded that there is a clear shift between the periods under examination in how the practice is seen and what aspects are highlighted: In the former letters, different types of animals, their use and their suffering are discussed relatively frequently, but patients, their suffering and diseases causing that suffering are hardly mentioned. In the latter letters, in turn, animals are rarely mentioned, but patients and diseases are discussed rather frequently. What is more, the utility of animal experimentation is raised substantially more frequently after the Act. It seems that before the Act, animals and their suffering are still considered worth discussing, but after it, people and their potential suffering replace animals in the discussion. In the same time, the role of the utility of vivisection, i.e. its potential for helping potentially suffering people, becomes increasingly important in people’s minds. Therefore, the findings indicate that the Act did influence people’s attitudes. Further, the findings support the idea that, instead of protecting animals, the Act protected vivisection by legitimising it and thus helping it become the standard method in biomedical research.