The implications of patient use of stimulants for perioperative care

The implications of patient use of stimulants for perioperative care 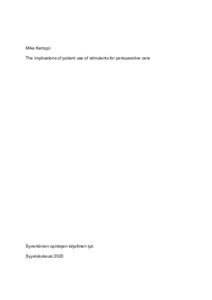 Background: Stimulants are a group of substances that have a stimulating effect on the central nervous system. Their usage is common, both for medical indications and for illegal recreational usages. However their implication for perioperative care has been based mostly on case reports and theoretical interactions. Methods: A comprehensive review of all publications on the topic accessible through PubMed was done, including case reports. 42 articles were initially found, of which 39 were considered relevant enough to be included. Results: Chronic stimulant use appears to not have that great impact on perioperative care and discontinuing stimulant medication preoperatively may not be necessary. Chronic stimulant usage doesn’t alter the need for anaesthetic agents for general anaesthesia. Conclusions: There is still a lack of large scale studies regarding chronic stimulant medication and its effect on perioperative care. Already published data seems to indicate that interactions between anaesthesia drugs and these substances may not pose as great a risk as previously suspected.