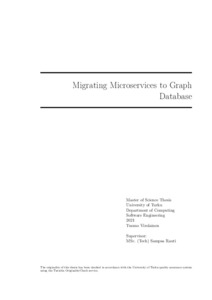 Microservice architecture is a popular approach to structuring web backend services. Another emerging trend, after a period of hibernation, is utilizing modern graph database management systems for managing complex, richly connected data. The two approaches have rarely been used in tandem, as microservices emphasize modularization and decoupling of services, while graph data models favor data integration.

In this study, literature on microservices and graph databases is reviewed and a synthesis between the two paradigms is presented. Based on the theoretical discussion, a software architecture combining the two elements is formulated and implemented using microservices serving content metadata at Yleisradio, the Finnish national broadcasting company. The architecture design follows the Design Science Research Process model.

Finally, the renewed system is evaluated using quantitative and qualitative metrics. The performance of the system is measured using automated API queries and load tests. The new system was compared to an earlier version based on a PostgreSQL database. The tests gave slight indication that the renewed system performed better for complex queries, where a large number of relations were traversed, but worse in terms of throughput under heavy load. Based on the these findings, a number of performance-enhancing optimizations to the system are introduced. Observations and perpectives are also gathered in a project retrospective session.

It is concluded that the resulting architecture holds promise for managing complex data rich in relations in a safe manner. In it, the different domains of the knowledge graph are decoupled into distinct named graphs managed by different microservices.