"I feel like in English I am more myself": Experiences of Bringing forward Language Identity in Interviews of Second Language Speakers of English

"I feel like in English I am more myself": Experiences of Bringing forward Language Identity in Interviews of Second Language Speakers of English 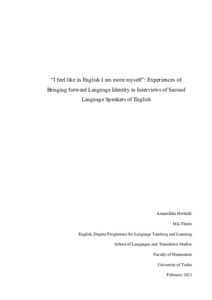 Identity and language identity are widely studied in the field of second language acquisition. Identity in relation to language has been studied from many perspectives, for example race, gender, ethnicity, and religion to name a few (see e.g., Preece 2016). In addition, personality traits in second language as a part of identity have been examined. However, how second language speakers of English actually perceive bringing forward their identity is not much researched.

The results showed that participants mostly felt they could express themselves in English as in their native languages, but majority of them still felt there was a difference when speaking in English. Bringing forward identity in English was considered important and most felt it was transmitted through English. It was also discovered that participants had experienced pressure to be a certain kind of English speaker. Half of the participants wished to attain nativelike competence in English, but also fluency and sociolinguistic competence were set as goals.

The results suggest that participants consider language identity from a personal perspective and the need to express it is also individual. In future, research could be conducted on more individuals’ comprehension of language identities thorough qualitative methods.