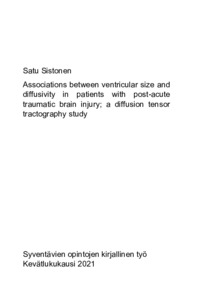 Purpose: To evaluate if diffusion parameters in the cingulum of patients with post-acute traumatic brain injury (TBI) are associated with the size of the lateral ventricles.
Methods: MRI at 3T including diffusion tensor imaging (DTI) was performed for 80 normal subjects (19-56 years) and 77 patients with TBI (18-56 years, 40 with mild and 37 with moderate-to-severe TBI). Mean diffusivity (MD) and fractional anisotropy (FA) were measured by tractography at a FA threshold of 0.30. Additionally, core MD, FA, axial diffusivity (AD) and radial diffusivity (RD) were analyzed using tractography-based core analysis in a volume of 3.0 cm3. The parameters were correlated with corresponding cross-sectional coronal areas of lateral ventricles (ALV).
Results: In patients with TBI, ALVs were larger than in controls. Of the DTI parameters, there were significant differences only in core FA and RD values between patients and controls. In controls, ALVs correlated positively with tract volumes (r=0.33) and core FAs (r=0.29) and negatively with MDs (r=-0.29), core MDs (r=-0.36) and RDs (r=-0.34) of the cingulum. In patients with mild TBI, the volumes of cingulum correlated positively (r=0.35) with ALV. Other DTI parameters did not correlate with the ALV in the patient groups.
Conclusion: In patients with TBI, DTI parameters of the cingulum generally do not correlate with ventricular size, as they do in normal controls. This can be due to the coexisting but conflicting effects of traumatic axonal injury and ventricular enlargement on diffusion. This phenomenon may mask abnormalities when using DTI to detect abnormalities of the cingulum in patients with TBI.
Keywords: Diffusion tensor imaging – Diffusion tensor tractography – Cingulum – Traumatic brain injury