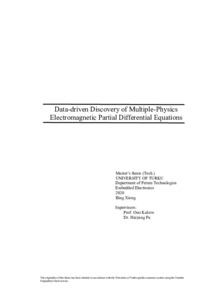 The subject of data-driven discovery for equations has developed rapidly in recent years, especially in the field of finding equations of unknown forms, which provides new ideas for the study of complex systems. When there are unknown noise sources and other uncertain factors in the system, it is quite difficult to directly derive the system governing equation, because the equation is complicated and the calculation cost is large. But if we try to find the equation directly from the data, it will be helpful to improve these problems.

For the data in nonlinear multi-physics electromagnetic system, the deep learning method can be used to find the equation, which can obtain the governing equation form accurately and has high time efficiency and parameter precision. This thesis studies the algorithm of data-driven discovery equations in electromagnetic multiple physics problems and realizes the inversion of Maxwell's multiple physics equations.

Firstly, three methods of data-driven equation discovery are introduced, including symbol regression, sparse regression and neural network. Secondly, an algorithm based on sparse regression and convolutional neural network is proposed for multiple physics equations of Maxwell equations. This algorithm uses Euler method to approximate time differentiation and convolution kernel to compute space differentiation. At the same time, in the training process, the pareto analysis method was used to remove the redundancy. Then, the model algorithm is applied to the multi-physics coupling simulation data of electromagnetic plasma, and the homogeneous and non-homogeneous equations of electromagnetic propagation are realized by using less time and space observation field samples, which has certain anti-noise performance. For the problem of propagation in uniform medium, the influence of spatial and temporal sampling method on the inversion precision of equation coefficients is studied. Under the condition of inhomogeneous media propagation, this thesis finds the changing law of inhomogeneous coefficient by changing the weight scale of neural network, aiming at the problem that the equation coefficient varies with the spatial scale. By using the properties of trigonometric series and some prior knowledge, the expression of the coefficient of inhomogeneous terms is approximated, and satisfactory results are obtained.

Finally, the thesis summarizes the proposed method and its main conclusion. In both homogeneous and inhomogeneous media, the model has good performance. Meanwhile, the author discusses the possible improvement methods for other problems and the idea that the structure of the model can be adjusted in a small range in the future and applied to the high-dimensional space and the problems with high-order spatial differentiation in the governing equations.