Factionalism in the CCP and the DPP -One’s Obstruction, the Other’s Impetus

Factionalism in the CCP and the DPP -One’s Obstruction, the Other’s Impetus 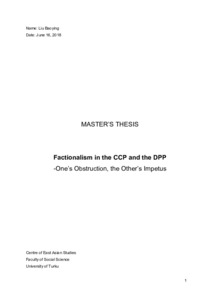 Factionalism in the CCP and the DPP -Ones Obstruction the Others Impetus (002).pdf (711.3Kb)
Lataukset:

Drawing from extensive existing sources which focus respectively on two types of intra-party politics, including books, journals, PhD dissertations and media accounts, this thesis sets out to compare two types of factionalism as seen in Chinese Communist Party (CCP) and Democratic Progressive Party (DPP) in Taiwan. Factionalism is examined under two dimensions: the historical dimension and contemporary dimension. This thesis explores how factionalism has influenced their respective party affairs. I divide this factional comparison into three stages according to certain political background, namely, the opposition stage, the ruling stage and the present stage. By comparing two manifestations of factionalism in each stage, I identify their shared characteristics and respective uniqueness. Through examining each factionalism chronically during the selected three stages, two detailed factionalism evolvement pictures are presented. My key discovery is that factionalism plays contrasting roles in the two parties. Specifically, factionalism acts as a destructive factor that causes disunity, political conflicts of all sorts and eventually leads to legitimacy erosion in the CCP. However, at the same time, it is factionalism that elicits the strongest political forces and helps facilitate compromise formation in the DPP.