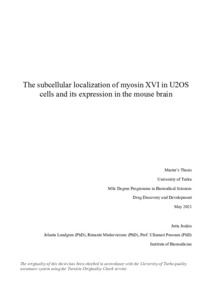 Myosin XVI is a neuronally expressed member of the myosin superfamily. Many aspects of this myosin remain mysterious, but its ability to regulate actin branching and indications of its enhanced expression in early development indicate a role in brain development. Intriguingly, the gene encoding myosin XVI has been linked to autism spectrum disorder and schizophrenia which both display disrupted neurodevelopment. Both are complex, debilitating and currently incurable conditions that have partly overlapping symptoms, including olfactory abnormalities that have recently attracted more interest.

This Master’s Thesis investigated the subcellular localization and developmental expression of myosin XVI to enlighten its role in the brain. Localization pattern and interaction with filamentous actin were studied in human osteosarcoma cells by staining. The expression pattern was examined in the postnatal mouse olfactory bulb, hippocampus, cerebellum, and cortex by western blotting. The results suggest a principal localization to the perinuclear region where myosin XVI may regulate vesicle traffic. Myosin XVI was also observed to co-localize with actin on the cell membrane where it may regulate membrane protrusion. Additionally, findings indicate a role in cell division. Western blotting revealed a higher expression in early postnatal development compared to later stages, apart from the olfactory bulb where the expression remained more stable.

These observations support the hypothesis that myosin XVI can regulate neurodevelopment. Future research will need to clarify the molecular mechanisms and cellular distribution of myosin XVI in the brain, especially in the olfactory bulb. This can add to understanding of autism spectrum disorder and schizophrenia and, ultimately, enable better treatments.