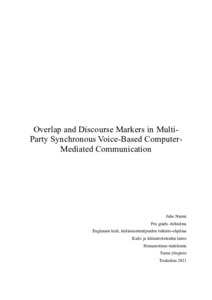 This thesis investigates the relevance of discourse markers (DM) to overlapping talk produced in synchronous voice-based computer-mediated communication (SVCMC). During the COVID-19 pandemic, SVCMC has become a popular form of communication. It is notorious for its dependency on technological variables and its vulnerability to overlap, and conversation analysts agree that avoiding overlap is one of the primary goals of the human turn-taking system. Since avoiding overlap is difficult in SVCMC, and DMs can contribute to turn-taking, the question is if DMs can help the speakers to avoid and resolve overlap in SVCMC.

The purpose of the present study is to examine the conversational environment of SVCMC and the use of DMs in terms of turn-taking and Schegloff’s overlap resolution device (ORD). There is an evident scarcity of modern SVCMC corpora. Therefore, an SVCMC corpus containing the transcripts of a Dungeons & Dragons role-playing session was compiled. There are five speakers in the corpus: two native speakers of American English and three speakers of English as a foreign language. Methodologically, corpus-illustrated linguistics is applied to the data to exemplify the technological variables, the occurrences of overlap, and the use of DMs within the SVCMC transcripts.

Based on the analysis, this thesis argues that multi-party SVCMC conversations take place in a unique conversational environment defined by technological variables including the volume level of the speakers, hardware issues, the lack of physical co-presence, and delay. They hamper SVCMC, contributing to its vulnerability to overlap. However, the transcripts illustrate that SVCMC speakers can utilise turn-initial, turn-medial, and turn-final DMs to manage turn-taking and to resolve problematic overlap. DMs as turn-initial turn-takers help the speakers recognise the risk of overlapping talk, and DMs as turn-final turn-yielders show to the overlapping speakers where their turns end. Furthermore, this study claims that DM combinations, DMs as markers of incipient speakership, and repeated DMs can contribute to resolving problematic overlap, and hence added to Schegloff’s ORD.

As such, this thesis provides preliminary findings on how SVCMC speakers adapt to the overlap-related constraints of SVCMC environments linguistically. They are based on a single corpus, and future research should confirm or challenge them. Potential areas of interest are the differences between native and non-native uses of DMs, the frequency of DMs in SVCMC, and SVCMC settings different from a roleplaying session. Furthermore, the horizons should be broadened by monitoring the effects of the technological variables and by studying hybrid forms of CMC consisting of audio-visual and textual elements.