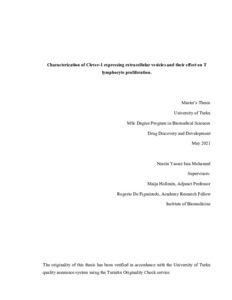 Immune checkpoint inhibitors (ICIs) are the new milestone for the management of advanced solid cancers. Unfortunately, most patients are not responsive to these treatments, since they may develop mechanisms that suppress the quality and quantity of antitumor T-cell responses. The tumor microenvironment (TME) is a key cellular component of tumors. It includes immunomodulatory cells that display important roles in the resistance to ICIs. Among these cells, tumor-associated macrophages (TAMs) from the M2-like phenotype have been described to favor tumor growth and downregulate local and systemic immune responses.
A subpopulation of these TAMs expresses Clever-1 (also known as Stabilin-1), which support the formation of an immunosuppressive TME and T-cell dysfunction. The depletion of Clever-1 both genetically and immunotherapeutically has been shown to activate the adaptive immune system and consequently, reduce tumor growth and metastasis. Recently, Clever-1 expression was detected in body fluids (plasma and lymph). However, how Clever-1 is secreted in the body and its functional consequences in T-cell function is poorly understood.
Here, we identify by using differential centrifugation process of body fluids and immortalized monocytic conditioned medium that Clever-1 is expressed in both extracellular vesicles (EVs) and non-vesicular (NV) formats. Further, we show using in vitro assays that Clever-1+EVs functionally target T-cells affecting their proliferation status. Future studies are required to prove the process is dependent on Clever-1 and further investigate in the mechanistic routes involved in the inhibition mechanisms of Clever-1+EVs. In conclusion, this study describes the expression of suppressive proteins (e.g., Clever-1) in EV compartments with their inhibitory effects on T-cells in body fluids.