A Particle Telescope Verification at an Accelerator Facility

A Particle Telescope Verification at an Accelerator Facility 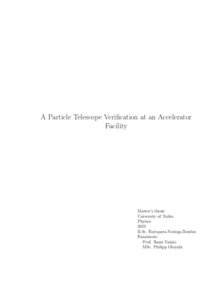 The environment around Earth hosts several particle populations. This region is affected by particles from the galactic cosmic rays, solar wind, and the trapped particles in the radiation belts. The solar wind carries energetic electrons, protons, and heavy ions into space. These conditions deeply affect our presence in the near-Earth environment. Protons and heavy ions can damage satellites, they can also trigger radiation hazards at aviation altitudes, and radio communications can experience interference. Energetic charged particles can affect spacecraft electronics. It is vital to analyse satellite anomalies and to understand the particles' path through the magnetosphere. The number of orbiting satellites in the near-Earth environment is growing. The presence of satellites and spacecraft creates much debris that is also on the rise. Eventually, our use of space can be threatened if further studies are not carried out. Earth's magnetic field provides the conditions for the particle populations to inhabit the region. However, the near-Earth radiation environment is deeply affected by the solar wind and the magnetospheric processes.

FORESAIL-1 is a nanosatellite mission that aims to assess the situation in the near-Earth space with sustainable deorbiting technology. The mission will observe energetic particles in the radiation belts, quantify electronic precipitation, and measure energetic neutral atoms of solar origin. Its findings shall improve our understanding of solar eruption energy and can provide in site data of the near-Earth radiation environment. FORESAIL-1 carries PATE, a Finnish particle telescope onboard.

This thesis presents the the method for the instrument calibration and results of a calibration rehearsal for the future analysis of data captured by PATE, during its calibration campaign. PATE has undergone preliminary tests at the RADEF cyclotron facility of the University of Jyväskyla, where it was exposed to monoenergetic proton beams. Using its eight active detector areas, PATE detected particle hits from the 10.5 MeV and 55 MeV proton beams at various angles and energies. Using a Geant4 model, we were able to simulate how the detector would respond to different conditions and predict the number of events within a range of particle energies.The simulations were adapted to controlled conditions that sought to replicate the testing facility RADEF environment. Here, we discuss the similarities and mismatches between the pulse-height data recorded and simulated for the 10.5 MeV beam, highlight possible solutions, and explain what the discrepancies can teach us about the detector and our current understanding of its operation.