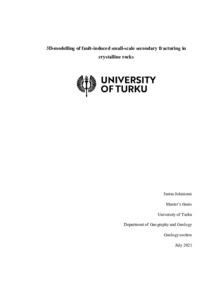 The objective of this Thesis was to develop new methods to model the microstructures within the bedrock, as these models improve the understanding of the properties of the micro-scale fracture networks and could be further applied to improve the interpretation of kinematics in the deformation zones and micro-scale hydrological properties of the different rock types. The second aim of the study was to compare datasets generated from the same samples by two alternative methods: X-ray Ct-scanning and the new 3D- grinding method. The study area is located in the municipality of Geta, in the northern parts of the Åland Islands, southern Finland. The Geta fault is a sub-vertical NE-SW trending dextral strike-slip fault. The 3D character of the fault and its well-developed damage zone allows studying the fault and its deformation zone in various scales and methods.
Setting for the 3D-samples was defined by field observations, 2D fracture and fault mapping from orthophotographs and 3D-photogrammetry models, which allow correlation of the 3D-fracture network characteristics in variable scales and with regional 2D-datasets from recent and ongoing investigations (Orrengrund and other MIRA-3D project targets).
3D-samples were drilled into 50*50/60mm sized drill cores for the 3D-grinder. Two of the 3D-samples were first Ct-scanned and grinded afterwards with 3D-grinder for making possible the micro-scale topology analyses in different sample depths and 3D-modelling on microstructures.
Results show that grinding tomography images are accurate and many different details can be viewed from them. The grinding tomography method allows generating data based on which microstructures can be modeled and observed with micrometer accuracy. The results of the 3D-modelling indicate that the orientations and dips of the micro-scale secondary fracturing corresponds to the macro-scale fracturing within the damage zones. However, fracture intersection affects the fracture geometries in micro-scale but not in larger scale. Micro-scale topology analyses show very little variations compared to macro-scale analyses.