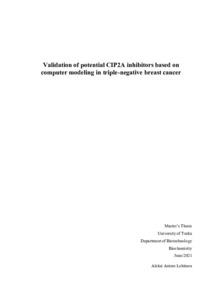 Cancer is a wide range of diseases that are caused by unchecked multiplication of the cells due to underlying mutations. Rapidly dividing cells may achieve metastasis, which is the stage where cancer cells are able to spread through blood stream to other organs. Breast cancer is the major cause of cancer related death in women. Triple-negative breast cancer (TNBC) accounts for about 10-15% of all breast cancers. There are no targeted therapies for this subtype as they lack three molecular markers that drugs are based on, leading to poor prognosis. Inhibition of the tumor suppressor PP2A and the overexpression of its inhibitor CIP2A is observed in many cancer types, including TNBC. CIP2A consist of two monomers forming a dimer. Based on computer modeling four compounds were predicted to be novel inhibitors of CIP2A. These four molecules were predicted to prevent dimerization of CIP2A leading to its degradation.

These compounds were tested by cell proliferation assays in five different TNBC cell lines. IC50 was calculated for each of the compounds across the five cell lines. Only one compound was able to potently kill 50% of the cells in 24 hours. The effect of this compound was also observed using colony growth experiment. CIP2A inhibition was evaluated by western blotting, which showed that CIP2A protein levels were decreased in response to CIP1 compared to the control cells. However, using dimerization assay with recombinant proteins, it was seen that CIP1 was not able to prevent CIP2A monomers to form the dimer as suggested by the modeling. RNA experiment using qPCR showed that the CIP2A RNA level also decreased in response to CIP1. With all the data from the experiments, it can be concluded that these compounds though promising in the beginning but after detailed evaluation cannot be used as direct CIP2A protein inhibitor and because of off-target effects research with these compounds should not be prioritized.