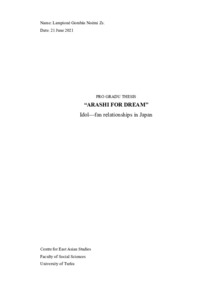 The topic of this thesis is idol—fan relationships in Japan, with a specific focus on male idol groups and their female fans.
The purpose of this study is twofold. First, it organizes the current discourses into a unified framework. It outlines the historical roots of the idol system, and it identifies four defining characteristics of idols: their multimedia presence/intertextuality, their relations to (and departure from) youth culture, the jimusho system, and the conscious cultivation of fandom. The intimacy between idols and their audience is reconceptualized as a parasocial relationship, and their commercialization and the viewers’ reception experiences are analyzed in this context.
Current theories on fan—idol relationships posit that the female fan gaze is asexual. The second objective of this thesis is to challenge this notion by resituating these arguments in the wider theoretical framework of gaze and by highlighting certain methodological issues in the literature, e.g., the problems of applying a psychoanalytic model and textual analysis, that assume a textual spectator, to the study of the meaning-making processes of actual, empirical audiences.
I also conducted a thematic analysis on popular idol fanfiction to explore the potential of an active, erotically charged female gaze, and to identify certain common appeals of idols as love objects. The discussion of the findings is structured along four central themes. First, themes related to the narratives are introduced as I explore the function of fame in these stories. Second, the inherent flexibility of the celebrity image is analyzed in regards to its potential to invite fantasy. Third, I focus on the construction of the idealized masculinity of idols, and I argue that amidst the “masculinity crisis” in Japan, male idols represent a new kind masculinity where threatening aspects are omitted. Nonetheless, these images are still perceived as masculine and are sexual by their audience. Fourth, I investigate how work and dreams were presented in the dream novels, and what these texts reveal about femininity in contemporary Japanese society. I suggest that idols embody neoliberal values which center on work and consumption as primary sites for identity-formation.
Since my research analyzed dream novels that specifically target women, its scope was naturally limited to female fans of Arashi. A possible avenue for future research could be a comparison between the findings of this study and the gaze of male Arashi fans, or an in-depth comparative analysis of female and male idol fandoms in general.