While Searching for a Scoop : Developing an Understanding of Working Conditions of Journalists in Japan Through an Analysis of Firsthand Accounts

While Searching for a Scoop : Developing an Understanding of Working Conditions of Journalists in Japan Through an Analysis of Firsthand Accounts 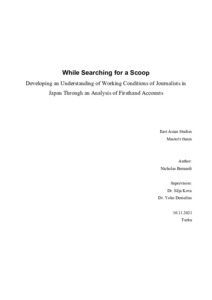 This thesis explores the working conditions of journalists in Japan through the perspective of reporters with experience working in such an environment. A tradition of studies on Japanese mass media depicts the working environment for journalists in Japan as difficult for those journalists that do not rely on the traditional means of access to official information, such as the kisha clubs. Previous research often fails to consider how journalists cope with the limitations from the government, as they face the need to gather the necessary information to carry out their job. This study is based on a qualitative approach and follows a constructivist paradigm. The participants have a major role in the construction of the knowledge at the centre of the study; the experience of the journalists is the knowledge upon which the discourse of this thesis is based on. Such experience is supplemented by personal experience in the workplace of journalists from fieldwork in Japan in 2019. Through the analysis of the accounts of the fifteen participants in this study, it appears that Japan is not a country where reporters face a particular challenge to their work. The records indicate that the journalists in Japan are not a homogenous group and that the need of each individual has a strong influence on how they approach the gathering of information. While the system put in place by the government to regulate official information is still relevant for a part of the journalists in Japan, especially those tied to major corporations, it is not as relevant as it was in the past. Thanks to the expansion of the internet and the loss of popularity of Japan for the international public, journalists do not need to rush while covering the country. Personal experience also plays an important role, both for local and international reporters, with ways to avoid official channels when in search of information. For many reporters, the key point to gather information while in Japan is to build a solid and wide network of sources that can substitute the official infrastructures. Through comparison of previous studies with firsthand experience of those involved with the Japanese mass media system, this study highlights a tendency in presenting an incomplete image of the workplace in which journalists operate. Such misconception is often brought by a lack of understanding behind the dynamics of the work of reporters in Japan. Further studies should be carried out on a larger scale and with a more varied sample to gain a better understanding of the dynamic behind journalisms in Japan.