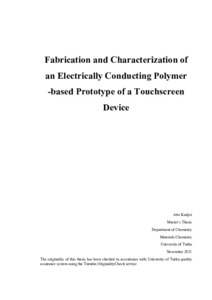 Conducting polymers belong to a class of polymers, which can conduct electricity. This ability rises from the conjugated nature of the polymer backbone, which allows charges to travel across and along them. Conducting polymers have attracted interest for different applications due to their beneficial features, such as high conductivity, sustainability, and high mechanical stability. These make them good replacements for metal oxides used as conducting materials, for example in touchscreens.
A touchscreen is a sensor that can sense a touch input on the surface. There are several different methods for accomplishing this, resistive and capacitive methods being the most used one’s accounting roughly 95 % of all touchscreen applications.
In this study, vapor phase polymerization was used to manufacture conducting polymer thin films from 3,4-ethylenedioxythiophene using iron(III)p-toluenosulfonate as the oxidant and pyridine as an inhibitor. The films were then used to construct a prototype of a simple surface capacitance touchscreen device.