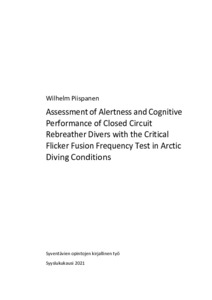 The aim of our study was to research the effect of cold water on the cognition of Finnish technical diving population using the Critical Flicker Fusion Frequency (CFFF) -test. We also studied the effect of breathing gases containing helium on cognition, subjective feeling of cold and on measured temperature of skin. There have not been any CFFF-studies in arctic conditions with a study-setup comparable to ours. Most of the CFFF-studies pertaining to hyperbaric medicine have been conducted in pressure chambers and there are only a handful of studies in open water.
23 subjects performed an identical dive with a controlled trimix gas in an ice- covered water filled quarry. The subjects assessed their thermal comfort at four time points during the dive. In addition, their skin temperature was measured at 5-min intervals throughout the dive. The divers performed the CFFF test before the dive, at target depth, and after the dive.
The CFFF-values showed a statistically significant increase to 111.7% during the dive compared to the pre-dive values (p<0.0001). The values returned to pre- dive values after the dive. In previous studies, a similar profile of CFFF-values has been noted. The divers’ skin temperatures showed a statistically significant decrease during the dive (p<0.001). The subjective temperature also decreased during the dive (p=0.01). The results of our study seem to indicate that cold water environment, or breathing gases containing helium have no effect on the profile of the CFFF-values.