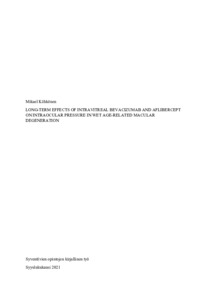 The long-term effects of intravitreal anti-vascular endothelial growth factor (anti-VEGF) agents on intraocular pressure (IOP) are debated. This study evaluates the incidence of sustained elevation of intraocular pressure (SE-IOP) associated with intravitreal injections of anti-VEGF agents bevacizumab and aflibercept in patients with wet age-related macular degeneration (wAMD). The retrospective cohort study includes 120 eyes from 120 patients with anti-VEGF treatment for wAMD. Three different anti-VEGF groups were considered: i) 71 cases receiving bevacizumab only, ii) 49 cases receiving bevacizumab before switch to aflibercept, iii) 49 cases after switch to aflibercept. 120 uninjected fellow eyes served as controls. SE-IOP was defined as an increase from baseline ≥ 5 mmHg on 2 consecutive follow-up visits. The incidence of SE-IOP was analysed using exact Poisson tests and survival analysis. The time course of IOP was evaluated with linear mixed effect modelling. In total, 6 treated eyes (2.38% incidence per eye-year) and 9 fellow eyes (3.58% incidence per eye-year) developed SE-IOP, and survival analysis showed no statistically significant difference (p = 0.43). Furthermore, the incidence of SE-IOP did not differ between the three anti-VEGF groups. Comparing the injected eyes of patients under 70 years to those of patients over 70 years, there was a statistically significant difference in survival without SE-IOP (incidence of 16.7% vs 0.7%, respectively, p < 0.0001). Intravitreal anti-VEGF injections were not associated with sustained elevation of IOP. These results do not support the claim that repeated anti-VEGF injections could elevate IOP.