Environmental factors affecting the phenology of the Atlantic puffin (Fratercula arctica) in the Westman Islands, Iceland

Environmental factors affecting the phenology of the Atlantic puffin (Fratercula arctica) in the Westman Islands, Iceland 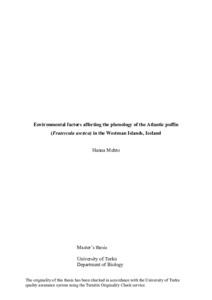 The timing of annual life-history events such as reproduction is a critical component of how animals respond to climate change. I studied the timing of reproduction and reproductive success of the largest population of Atlantic puffins (Fratercula arctica) in the world, located in the Westman Islands, Iceland. Puffins are considered to be excellent bioindicators for the overall status of their ecosystem due to the bird’s long lifespan and specialist coastal foraging.
So far, attempts to understand the potential impacts of climate variation on seabirds have studied relationships between oceanographic features and the birds' distribution and demographic parameters. I add to these studies by exploring the effects on chick numbers and timing of breeding through changes in SST, salinity and large-scale oceanic (SPG) and climate (wNAO) proxies. To get a sense of the population’s demography, I used a long-term time series of observational data on annual productivity and the average fledging dates of chicks. I discovered, that since 2006, the puffins have been breeding approximately three weeks later, and after 2015, there has been almost a 100-fold increase in productivity, with an annual increase of roughly 871 individual birds. Of the climate proxies, wNAO and SPG showed a significant correlation with productivity and fledging dates, respectively.
This thesis suggests that the puffin population of the Westman Islands is currently on the rise, and that the ocean climate proxies wNAO and SPG play a role in their population fluctuations.