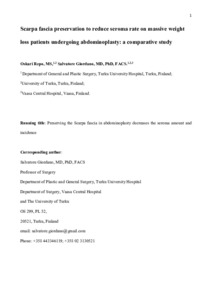 Seroma is one of the most common complication in abdominoplasty, particularly in massive weight loss patients. Scarpa fascia preservation seems to mitigate postoperative complications. We aimed to further investigate this issue on massive weight loss patients.
This was single-centered retrospective comparative study, including a total of 202 MWL patients operated between 2009 and 2019 in a University Hospital. Patients with a weight loss greater than 30 kg underwent primary abdominoplasty were included. Of them, 149 went through traditional abdominoplasty and 53 Scarpa fascia preserving abdominoplasty. The primary outcome measure was seroma occurrence, while drainage amount, hospital stay and surgical site occurrence were also charted.

Preserving Scarpa fascia resulted in a significantly reduced seroma occurrence (9.4% vs 26.2%, p=0.011) and decreased mean drainage time (3.7 vs 5.3 days, p=0.025). Trend towards lowered drainage output and shorter hospital stay were also detected. Other complications did not differ between the study groups.