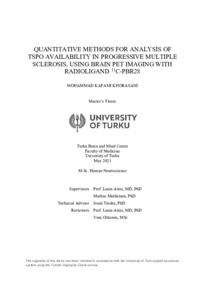 Background – The translocator protein 18kDA (TSPO) is closely related to diffuse inflammatory demyelinating injury and hence represents an ideal target for brain imaging in progressive-MS pathology in vivo. However, quantification of the TSPO is associated with number of challenges corresponding to its genetic polymorphism and localization in the CNS and surroundings. Subsequent inaccuracy in TSPO quantification with plasma concentration or anatomical brain reference region proposes for implementation of alternative quantification approaches that are hypothesized to compensate the shortcomings.
Objectives – This study has tried to perform a comparative evaluation of novel quantification approaches for analyzing neuroinflammation using 11C-PBR28 tracer in MR-PET brain imaging of the patients with SPMS versus healthy control participants.
Methods – Nine secondary progressive MS and 11 healthy controls have been examined in 3Tesla MR and (11C-PBR28) PET brain imaging in Turku PET Centre (TPC). Brain segmentation and image preprocessing were fulfilled using Freesurfer v.5.3 and SPM12 toolset in MATLAB. Lesion and ROIs delineation was performed via in house software. Tracer binding activity was measured, and volume of distribution was quantified via 2TCM compartmental model. Four brain reference regions were considered for normalization of the values, consisted of three anatomical reference regions in addition to one supervised clustering pseudo-references modified version of the algorithm developed in the Harvard university for similar aim.
Results – The results of this study obtained via examination of several kinetic models, data and partial volume correction steps aimed at narrowing down the selected approaches and accounting the apparently most robust method for the higher-level analysis and the statistical examination. However, through neither of the steps any result represented a significant support for the H1 hypothesis in this study.
The low signal to noise ratio of the PET imaging data with the utilized radioligand and the diffusivity of the TSPO in the MS brain, along with the complexity of quantification caused by the polymorphism genotype and the affinity binding of the radiotracer in MS brains and blood plasma are the greatest obstacles challenging the analysis of the PET-MR imaging data in the pathological studies of the MS in vivo.