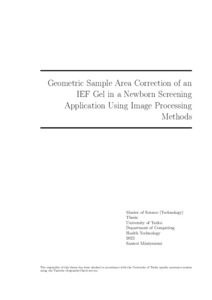 Isoelectric focusing (IEF) is one of the most used methods for screening hemoglobinopathies in newborns. IEF uses a pH gradient to separate the hemoglobin molecules, based on their isoelectric point, into sharp and distinct bands. These bands are then compared to control samples to identify different hemoglobin variants. Sometimes the IEF gel has distortions, caused by sources relating to the manufacturing of the gel or the laboratory environment, which hinder the interpretation of the gel. The goal of this thesis is to propose a method for straightening images of these IEF gels using image processing methods.

Images of real IEF gels are used to develop the method, which is then evaluated with three different tests. The tests include performance, band quantitation, and stability tests. The real images dataset is used for the evaluation in tests one and two, while artificial worst-case images are produced for test three. The results of these tests demonstrate the capabilities and limits of the proposed method.

The proposed method performed well with the dataset containing real images. Out of the 142 images in the dataset, the method managed to straighten 139 of them successfully. In the second test, it was noticed that the proposed method retained the relative band quantities accurately. These results show that the straightening works as intended and can be used as a helpful tool when identifying different hemoglobinopathies in IEF gels. The method could also be developed further to work with images of other protein gel electrophoresis as well, as long as the specifications for the method are defined again accordingly.