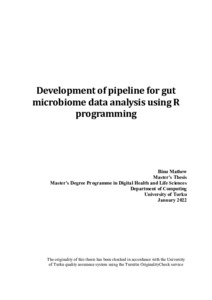 Microorganisms are present everywhere in the environment. They are present on and inside of all higher organisms and they can be harmful as well as useful for the host. Microorganisms play an important role in the evolution and thus make it important to study them. Microbiota is the name given for the totality of micro-organisms present in the environment and the microbiota of a particular habitat is known as the microbiome. Due to its presence in the biosphere and the human body, a large number of experiments including the human microbiome project (HMP) are carried out and a huge amount of data is produced.

The gut microbiome is one of the most studied microbiota. Microorganisms living in the host gut play several important roles like metabolic activity, anti-cancer activity, and anti-infection activity. A healthy individual has a balanced microbiota and any imbalance in them causes various diseases and health issues. Obesity or even certain cancers are caused by the imbalance of the microbes in the intestine.

This project focuses on developing a bioinformatics pipeline to analyse the gut microbiome in a dietary intervention study. The data used for this project was collected from a study which was aimed to study gastric cancer where we were exploring the role and difference in composition of the gut microbiome. This thesis handles the entirety of the data processing and analysis through R involving: pre-processing of data; phyloseq object generation; statistical analysis and visualization; diversity indices calculation (alpha and beta) and composition analysis of microbiomes. After completion of the project, one would be able to analyse the gut microbiome data with minimal effort.