The functions of subjectless declarative main clauses in spoken Swedish

The functions of subjectless declarative main clauses in spoken Swedish 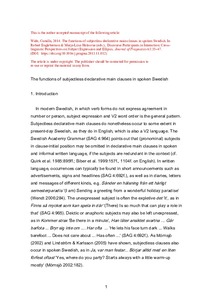 
Swedish is a V2 language in which verb forms do not express number or person. Subject expression is the general pattern. Subjectless clauses do nonetheless occur both in spoken and written Swedish. This paper explores subjectless declarative main clauses in conversational data. The analysis is based on 77 occurrences in eight conversations from two different corpora. The subjectless clauses occur in four types of contexts: comments on the situation or discourse, elaborations, final points or evaluations and brief responses. The analysis shows that speakers use subjectless clauses when they react to something said or done in the situation, but at the same time they avoid contributing (too much) topical substance. The clauses are used in situations where some kind of break occurs and cohesion needs to be marked. In their situated contexts, the clauses have a number of closely-related functions, such as drawing a conclusion based on the preceding discourse, making a point implicitly conveyed explicit, providing additional background parenthetically, aligning with other speakers and providing a minimal response to a request or question. The study thus shows that subjectless clauses are an established conversational practice in Swedish and are used in certain types of communicative situations.