Are Gritty People Happier than Others?: Evidence from the United States and South Korea

Are Gritty People Happier than Others?: Evidence from the United States and South Korea 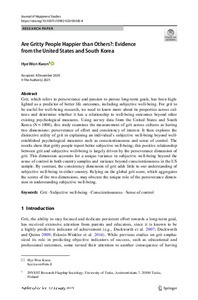 Grit, which refers to perseverance and passion to pursue long-term
goals, has been highlighted as a predictor of better life outcomes,
including subjective well-being. For grit to be useful for well-being
research, we need to know more about its properties across cultures and
determine whether it has a relationship to well-being outcomes beyond
other existing psychological measures. Using survey data from the United
States and South Korea (N = 1008), this study examines the measurement
of grit across cultures as having two dimensions: perseverance of effort
and consistency of interest. It then explores the distinctive utility
of grit in explaining an individual’s subjective well-being beyond
well-established psychological measures such as conscientiousness and
sense of control. The results show that gritty people report better
subjective well-being; this positive relationship between grit and
subjective well-being is largely driven by the perseverance dimension of
grit. This dimension accounts for a unique variance in subjective
well-being beyond the sense of control in both country samples and
variance beyond conscientiousness in the US sample. By contrast, the
consistency dimension of grit adds little to our understanding of
subjective well-being in either country. Relying on the global grit
score, which aggregates the scores of the two dimensions, may obscure
the unique role of the perseverance dimension in understanding
subjective well-being.