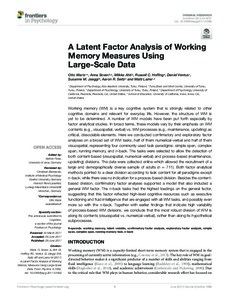 Working memory (WM) is a key cognitive system that is strongly related to other cognitive domains and relevant for everyday life. However, the structure of WM is yet to be determined. A number of WM models have been put forth especially by factor analytical studies. In broad terms, these models vary by their emphasis on WM contents (e.g., visuospatial, verbal) vs. WM processes (e.g., maintenance, updating) as critical, dissociable elements. Here we conducted confirmatory and exploratory factor analyses on a broad set of WM tasks, half of them numerical-verbal and half of them visuospatial, representing four commonly used task paradigms: simple span, complex span, running memory, and n-back. The tasks were selected to allow the detection of both content-based (visuospatial, numerical-verbal) and process-based (maintenance, updating) divisions. The data were collected online which allowed the recruitment of a large and demographically diverse sample of adults (n = 711). Both factor analytical methods pointed to a clear division according to task content for all paradigms except n-back, while there was no indication for a process-based division. Besides the content-based division, confirmatory factor analyses supported a model that also included a general WM factor. The n-back tasks had the highest loadings on the general factor, suggesting that this factor reflected high-level cognitive resources such as executive functioning and fluid intelligence that are engaged with all WM tasks, and possibly even more so with the n-back. Together with earlier findings that indicate high variability of process-based WM divisions, we conclude that the most robust division of WM is along its contents (visuospatial vs. numerical-verbal), rather than along its hypothetical subprocesses.