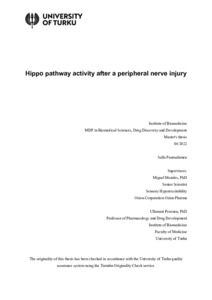 Transcriptional mechanisms underlying chronic neuropathic pain are still unclear. However, novel studies have suggested that the Hippo pathway and especially its compartments YAP and TAZ have a role in the pathology of neuropathic pain. Additionally, the active Wnt pathway is involved in the development of neuropathic pain after a nerve injury through its main effector β-catenin. The accumulation of YAP, TAZ and β-catenin into a nucleus of neurons and glia cells is suggested to activate proliferative genes. This would further cause hypersensitivity and pain chronification. The thesis project aimed to confirm the results of previous studies about the nuclear shuttle of YAP, TAZ and β-catenin in the peripheral and central nervous system.
The research was done by comparing hypersensitive chronic constriction injury rat model to controls. The protein expression levels of YAP, TAZ and β-catenin were analyzed by purifying cytoplasmic and nuclear proteins of spinal cord and dorsal root ganglia and conducting Western blot analysis. YAP and TAZ were overexpressed in the cytoplasm in the spinal cord and the dorsal root ganglia. Instead, β- catenin had cytoplasmic overexpression only in the dorsal root ganglia. The nuclear overexpression was not detected. Additionally, YAP was noticed to localize in the cytoplasm of healthy human spinal cord by help of immunohistochemistry technique.
The results suggest that YAP, TAZ and β-catenin are participating in the pathophysiology of neuropathic pain after a peripheral nerve injury in both peripheral and central nervous system. With help of the results, more specific analgesics for neuropathic pain can be developed.