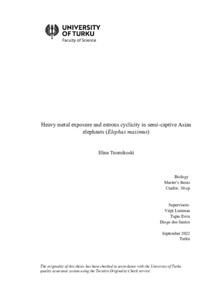 Background: Pollutants cause significant harm to ecosystems and organisms and have become a major concern. While some toxic substances are natural, like heavy metals, and others are anthropogenic like PCBs and microplastics, human activities are the main contamination source of both. Even though pollutants affect all organisms, they often affect long-lived animals like eagles, whales and polar bears the most due to bioaccumulation, causing various negative effects. The effects on reproductivity are of special interest, as normal reproduction is vital for any species survival. The purpose of this thesis is to study the heavy metal concentrations in endangered Asian elephants (Elephas maximus) in Myanmar, using a semi-captive population where blood sampling is possible, and to perform a pilot study to measure estrous cyclicity in females. The aims are to map element concentrations in elephants, and to verify a method for estrous cyclicity measurements for future studies.

Conclusion: In this thesis, the heavy metal concentrations and estrous cyclicity were measured for the first time in this study population. There were no signs of acute heavy metal poisoning, but there were some possible indicators of chronic exposure. Also, zinc levels were found to be lower than reference values, raising concerns of possible trace element deficiency. Estrous cycle profiles corresponded to the reproductive history or status of the elephants. Two elephants out of eleven had indefinite estrous cycles, however, their cycling profiles are likely to be affected by aging. This thesis facilitates future studies on element concentrations and allopregnanolone measurement in endangered Asian elephants, which can be used in e.g. conservational efforts.