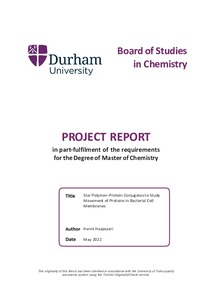 Antibiotic resistance in bacteria is a rapidly growing issue worldwide. Especially, a lack of efficient antibiotics against Gram-negative bacteria is a problem since they have an outer membrane that provides additional protection against defence factors. Outer membrane proteins move to the cell poles during cell division. Preventing this movement could potentially disrupt cell division and provide a new approach to antibiotic development. Star polymer–colicin conjugates might bind the proteins together and thus prevent their movement. This project aimed to produce a small library of star polymers and conjugate them to model protein myoglobin. Star polymers were successfully synthesised by single-electron transfer living radical polymerisation. Their indicative sizes were determined by dynamic light scattering, although aggregation complicated this. End-group conversions were performed to introduce required aldehyde functionality, but no definite characterisations were obtained by 1H NMR because of dominant polymer peaks. However, the conversions were confirmed successful for a small linear polymer synthesised by identical methods. Organocatalyst-mediated protein aldol ligation was tried for conjugation, but gel electrophoresis staining was not sensitive enough for final confirmation. However, dynamic light scattering studies indicate bigger particles than either of the starting materials, which is promising. These results could be used to choose an optimal size of star polymers to be conjugated to colicins. How the binding of these conjugates affects outer membrane protein movement can be studied by fluorescence microscopy.