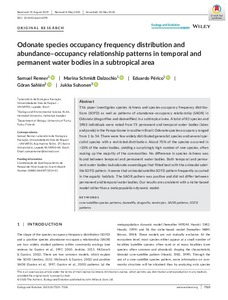 This paper investigates species richness and species occupancy frequency distributions (SOFD) as well as patterns of abundance-occupancy relationship (SAOR) in Odonata (dragonflies and damselflies) in a subtropical area. A total of 82 species and 1983 individuals were noted from 73 permanent and temporal water bodies (lakes and ponds) in the Pampa biome in southern Brazil. Odonate species occupancy ranged from 1 to 54. There were few widely distributed generalist species and several specialist species with a restricted distribution. About 70% of the species occurred in <10% of the water bodies, yielding a surprisingly high number of rare species, often making up the majority of the communities. No difference in species richness was found between temporal and permanent water bodies. Both temporal and permanent water bodies had odonate assemblages that fitted best with the unimodal satellite SOFD pattern. It seems that unimodal satellite SOFD pattern frequently occurred in the aquatic habitats. The SAOR pattern was positive and did not differ between permanent and temporal water bodies. Our results are consistent with a niche-based model rather than a metapopulation dynamic model.