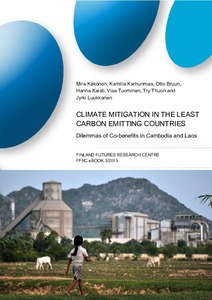 Development has entered a time where it cannot be thought of without reference to climate change. While historically development in the industrialized countries has to a great extent been driven by a fossil fuel based economy, this option is no longer seen as viable for developing countries, which are expected to pursue different pathways of development. At the same time, the impacts of a changing climate affect the poorest countries and populations disproportionately, and multilateral policy declarations signed by most countries underline that there must be an effort to prevent and mitigate this. The effects of climate change onto development policies and practice is also reflected in donor countries’ change in perception. Donor countries have begun increasingly integrating climate change objectives into development cooperation programmes and official development assistance (ODA). While significant in terms of discontinuing support to fossil fuels and attempting to increase resilience, this trend also brings into the fore new dilemmas. The main dilemma which emerges – and is explored further in this book – is when development cooperation finance is used in the least developed countries for projects and policies which are principally oriented towards climate change mitigation.