Shifting discourses of equality and equity of basic education: an analysis of national policy documents in China

Shifting discourses of equality and equity of basic education: an analysis of national policy documents in China 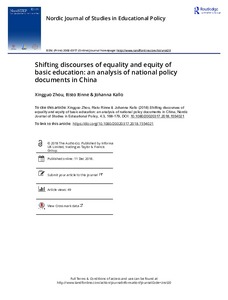 As the world’s second-largest economy, China faces great challenges in educational equality and equity. This article examines the evolution of discourses surrounding educational equality by focusing on how Chinese central governments from the 1980s to the 2010s have formulated this issue. Through key national policy documents and drawing upon Espinoza’s equality–equity model, we analyse the sociopolitical context of changes in China’s educational discourse and come to the conclusions that in the 1980s, shifting the government’s agenda to economic reforms, national poverty subsumed the issue of educational equality. In the 1990s, according to the inherited political rationale, the government treated educational inequality as a ‘necessary process’ of Chinese socialist market economy. Since the 2000s, equality and equity has become an ‘urgent issue’ as the government’s agenda has shifted focus to stabilizing the nation’s economy and society. We propose labelling these three stages of equality–equity discursive departure in the 1980s, continuity and rupture in the 1990s, and prioritization since the 2000s.