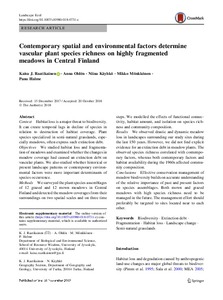 Context: Habitat loss is a major threat to biodiversity. It can create temporal lags in decline of species in relation to destruction of habitat coverage. Plant species specialized in semi-natural grasslands, especially meadows, often express such extinction debt.

Objectives: We studied habitat loss and fragmentation of meadows and examined whether the changes in meadow coverage had caused an extinction debt on vascular plants. We also studied whether historical or present landscape patterns or contemporary environmental factors were more important determinants of species occurrence.

Methods: We surveyed the plant species assemblages of 12 grazed and 12 mown meadows in Central Finland and detected the meadow coverages from their surroundings on two spatial scales and on three time steps. We modelled the effects of functional connectivity, habitat amount, and isolation on species richness and community composition.

Results: We observed drastic and dynamic meadow loss in landscapes surrounding our study sites during the last 150 years. However, we did not find explicit evidence for an extinction debt in meadow plants. The observed species richness correlated with contemporary factors, whereas both contemporary factors and habitat availability during the 1960s affected community composition.

Conclusions: Effective conservation management of meadow biodiversity builds on accurate understanding of the relative importance of past and present factors on species assemblages. Both mown and grazed meadows with high species richness need to be managed in the future. The management effort should preferably be targeted to sites located near to each other.