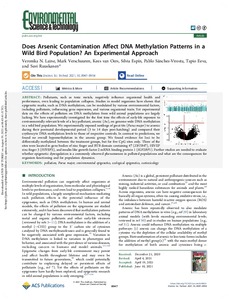 Pollutants, such as toxic metals, negatively influence organismal health and
performance, even leading to population collapses. Studies in model organisms have shown that
epigenetic marks, such as DNA methylation, can be modulated by various environmental factors,
including pollutants, influencing gene expression, and various organismal traits. Yet experimental
data on the effects of pollution on DNA methylation from wild animal populations are largely
lacking. We here experimentally investigated for the first time the effects of early-life exposure to
environmentally relevant levels of a key pollutant, arsenic (As), on genome-wide DNA methylation
in a wild bird population. We experimentally exposed nestlings of great tits (Parus major) to arsenic
during their postnatal developmental period (3 to 14 days post-hatching) and compared their
erythrocyte DNA methylation levels to those of respective controls. In contrast to predictions, we
found no overall hypomethylation in the arsenic group. We found evidence for loci to be
differentially methylated between the treatment groups, but for five CpG sites only. Three of the
sites were located in gene bodies of zinc finger and BTB domain containing 47 (ZBTB47), HIVEP
zinc finger 3 (HIVEP3), and insulin-like growth factor 2 mRNA binding protein 1 (IGF2BP1). Further studies are needed to evaluate whether epigenetic dysregulation is a commonly observed phenomenon in polluted populations and what are the consequences for organism functioning and for population dynamics.