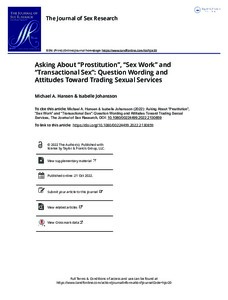 This study explored the impact of question wording on attitudes toward trading sexual services. There are no previous research agendas investigating how views on the trade in sex are susceptible to question word choice. We utilized an original survey to assess how three different concepts used to represent the exchange of sexual services impact on the reported level of acceptability among respondents. The concepts we selected were “prostitution,” “sex work”, and “transactional sex.” We also explored the contrasting effects of predictor variables based on question wording, such as general sexual attitudes and positive and negative associations with trading sex. We found that attitudes toward the trading of sex is partially a function of question wording. Respondents were more likely to translate negative associations with the exchange of sexual services into unacceptability when assigned a question using the term prostitution. The results indicated that prostitution is a stigmatized word, resonating more negatively with respondents as compared to sex work or transactional sex. When asked about transactional sex, respondents were less likely to translate an attitude into an assessment on acceptability, indicating that the term is vague. Sex work elicited more neutral responses on acceptability. The results suggest that sex work would be the most useful term to use in dialogue and debate regarding the trade in sexual services. Sex work does not appear to be imbued with the same sense of negativity as prostitution and the meaning of sex work seems clearer than transactional sex.