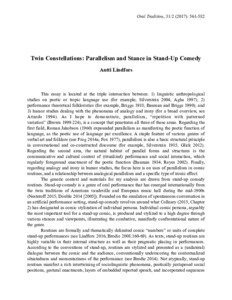 This paper addresses the interrelations between poetic parallelism and
interactional stance-taking in stand-up comedy by examining commercially
edited recordings of stand-up routines performed by two contemporary
comics. Methodologically, the article suggests a heuristic distinction
between 1) an approach to parallelism as a textual and rhetorical device
based on sequential repetition of units of expression, and 2) a more
positional or symbolic orientation that conceptualizes parallelism as a
higher-order structural and functional principle. It is concluded that
both types rely on iconic mappings across co-textual signs. The
flexibility of parallelism is simultaneously proposed as affording
diversity on the level of discursive presentation.