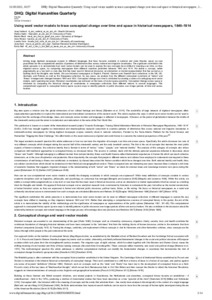 Linking large digitized newspaper corpora in different languages that have become available in national and state libraries opens up new possibilities for the computational analysis of patterns of information flow across national and linguistic boundaries. The significant contribution this article presents is to demonstrate how word vector models can be used to explore the way concepts have shifted in meaning over time, as they migrated across space, by comparing newspapers from different countries published between 1840 and 1914. We define a concept, rather pragmatically, as a key term or core idea that has been used in historical discourse: an abstraction or mental representation that has served as a building block for thoughts and beliefs. We use historical newspapers in English, Finnish, German and Swedish from collections in the UK, US, Germany, and Finland, as well as the Europeana collection. As use cases, we analyze how the different conceptual constructs of “nation” and “illness” emerged and changed between 1840 and 1920. Conceptual change over time is simulated by creating a series of overlapping word vector models, each spanning ten years. Historical vocabularies are retrieved on the basis of vector space proximity. Conceptual change across space is simulated by comparing the historical change of vocabularies in newspaper collections from different nations in several languages. This computational approach to conceptual history opens up new ways to identify patterns in public discourse over longer periods of time and across borders.