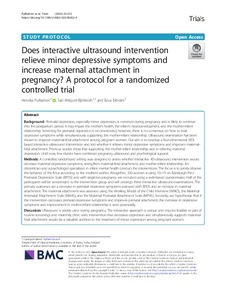 Background: Perinatal depression, especially minor depression, is common during pregnancy and is likely to continue into the postpartum period. It may impair the mother's health, the infant's neurodevelopment, and the mother-infant relationship. Screening for perinatal depression is recommended; however, there is no consensus on how to treat depressive symptoms while simultaneously supporting the mother-infant relationship. Ultrasound examination has been shown to improve maternal-fetal attachment among pregnant women. Our aim is to develop a four-dimensional (4D) based interactive ultrasound intervention and test whether it relieves minor depressive symptoms and improves maternal-fetal attachment. Previous studies show that supporting the mother-infant relationship aids in relieving maternal depression. Until now, few studies have combined pregnancy ultrasound and psychological support.

Methods: A controlled randomized setting was designed to assess whether interactive 4D-ultrasound intervention would decrease maternal depressive symptoms, strengthen maternal-fetal attachment and mother-infant relationship. An obstetrician and a psychologist specialized in infant mental health conduct the interventions. The focus is to jointly observe the behavior of the fetus according to the mothers' wishes. Altogether, 100 women scoring 10-15 on Edinburgh Pre-/Postnatal Depression Scale (EPDS) and with singleton pregnancy are recruited using a web-based questionnaire. Half of the participants will be randomized to the intervention group and will undergo three interactive ultrasound examinations. The primary outcomes are a decrease in perinatal depressive symptoms assessed with EPDS and an increase in maternal attachment. The maternal attachment was assessed using the Working Model of the Child Interview (WMCI), the Maternal Antenatal Attachment Scale (MAAS), and the Maternal Postnatal Attachment Scale (MPAS). Secondly, we hypothesize that if the intervention decreases prenatal depressive symptoms and improves prenatal attachment the decrease in depressive symptoms and improvement in mother-infant relationship is seen postnatally.

Discussion: Ultrasound is widely used during pregnancy. The interactive approach is unique and may be feasible as part of routine screenings and maternity clinic visits. Intervention that decreases depression and simultaneously supports maternal-fetal attachment would be a valuable addition to the treatment of minor depression among pregnant women.