‘In Search of Carnivalesque Anomie: The Disavowal of the Liberation in Andreï Makine’s The Crime of Olga Arbyelina’

‘In Search of Carnivalesque Anomie: The Disavowal of the Liberation in Andreï Makine’s The Crime of Olga Arbyelina’ 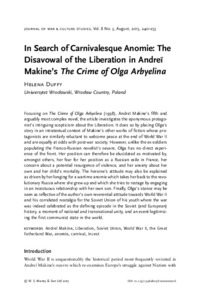 Focussing on The Crime of Olga Arbyelina(1998), Andreï Makine’s fifth and arguably most complex novel, the article investigates the eponymous protagonist’s intriguing scepticism about the Liberation. It does so by placing Olga’s story in an intratextual context of Makine’s other works of fiction whose protagonists are similarly reluctant to welcome peace at the end of World War II and are equally at odds with postwar society. However, unlike the ex-soldiers populating the Franco-Russian novelist’s oeuvre, Olga has no direct experience of the front. Her position can therefore be elucidated as motivated by, amongst others, her fear for her position as a Russian exile in France, her concern about a potential resurgence of violence, and her anxiety about her own and her child’s mortality. The heroine’s attitude may also be explained as driven by her longing for a wartime anomie which takes her back to the revolutionary Russia where she grew up and which she tries to restage by engaging in an incestuous relationship with her own son. Finally, Olga’s stance may be seen as reflective of the author’s own reverential attitude towards World War II and his correlated nostalgia for the Soviet Union of his youth where the war was indeed celebrated as the defining episode in the Soviet (and European) history, a moment of national and transnational unity, and an event legitimising the first communist state in the world.