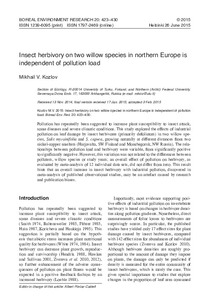 
Pollution has repeatedly been suggested to increase plant susceptibility to insect attack, some diseases and severe climatic conditions. This study explored the effects of industrial pollution on leaf damage by insect herbivores (primarily defoliators) in two willow species, Salix myrsinifolia and S. caprea, growing naturally at different distances from two nickel-copper smelters (Harjavalta, SW Finland and Monchegorsk, NW Russia). The relationships between pollution load and herbivory were variable, from significantly positive to significantly negative. However, this variation was not related to the differences between polluters, willow species or study years; an overall effect of pollution on herbivory, as evaluated by meta-analysis of 12 individual data sets, did not differ from zero. This result hints that an overall increase in insect herbivory with industrial pollution, discovered in meta-analysis of published observational studies, may be an artefact caused by research and publication biases.