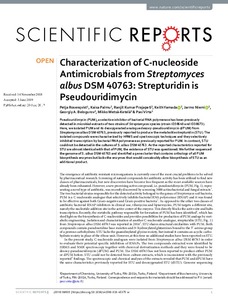 Pseudouridimycin (PUM), a selective inhibitor of bacterial RNA polymerase has been previously detected in microbial-extracts of two strains of Streptomyces species (strain ID38640 and ID38673). Here, we isolated PUM and its deoxygenated analogue desoxy-pseudouridimycin (dPUM) from Streptomyces albus DSM 40763, previously reported to produce the metabolite strepturidin (STU). The isolated compounds were characterized by HRMS and spectroscopic techniques and they selectively inhibited transcription by bacterial RNA polymerase as previously reported for PUM. In contrast, STU could not be detected in the cultures of S. albus DSM 40763. As the reported characteristics reported for STU are almost identical with that of PUM, the existence of STU was questioned. We further sequenced the genome of S. albus DSM 40763 and identified a gene cluster that contains orthologs of all PUM biosynthesis enzymes but lacks the enzymes that would conceivably allow biosynthesis of STU as an additional product.