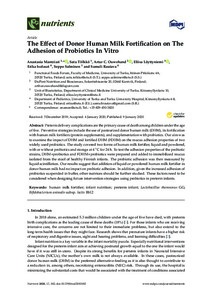 Preterm delivery complications are the primary cause of death among children under the age of five. Preventive strategies include the use of pasteurized donor human milk (DHM), its fortification with human milk fortifiers (protein supplements), and supplementation with probiotics. Our aim was to examine the impact of DHM and fortified DHM (FDHM) on the mucus adhesion properties of two widely used probiotics. The study covered two forms of human milk fortifier, liquid and powdered, with or without probiotics and storage at 4 °C for 24 h. To test the adhesion properties of the probiotic strains, DHM+probiotics and FDHM+probiotics were prepared and added to immobilized mucus isolated from the stool of healthy Finnish infants. The probiotic adhesion was then measured by liquid scintillation. Our results suggest that addition of liquid or powdered human milk fortifier in donor human milk had no impact on probiotic adhesion. In addition, given the increased adhesion of probiotics suspended in buffer, other matrices should be further studied. These factors need to be considered when designing future intervention strategies using probiotics in preterm infants.