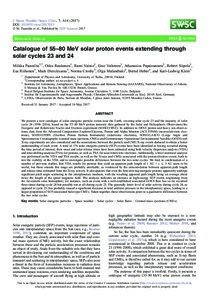 We present a new catalogue of solar energetic particle events near the Earth, covering solar cycle 23 and the majority of solar cycle 24 (1996-2016), based on the 55-80 MeV proton intensity data gathered by the Solar and Heliospheric Observatory/the Energetic and Relativistic Nuclei and Electron experiment (SOHO/ERNE). In addition to ERNE proton and heavy ion observations, data from the Advanced Composition Explorer/Electron, Proton and Alpha Monitor (ACE/EPAM) (near-relativistic electrons), SOHO/EPHIN (Electron Proton Helium Instrument) (relativistic electrons), SOHO/LASCO (Large Angle and Spectrometric Coronagraph) (coronal mass ejections, CMEs) and Geostationary Operational Environmental Satellite (GOES) soft X-ray experiments are also considered and the associations between the particle and CME/X-ray events deduced to obtain a better understanding of each event. A total of 176 solar energetic particle (SEP) events have been identified as having occurred during the time period of interest; their onset and solar release times have been estimated using both velocity dispersion analysis (VDA) and time-shifting analysis (TSA) for protons, as well as TSA for near-relativistic electrons. Additionally, a brief statistical analysis was performed on the VDA and TSA results, as well as the X-rays and CMEs associated with the proton/electron events, both to test the viability of the VDA and to investigate possible differences between the two solar cycles. We find, in confirmation of a number of previous studies, that VDA results for protons that yield an apparent path length of 1 AU < s less than or similar to 3 AU seem to be useful, but those outside this range are probably unreliable, as evidenced by the anticorrelation between apparent path length and release time estimated from the X-ray activity. It also appears that even the first-arriving energetic protons apparently undergo significant pitch angle scattering in the interplanetary medium, with the resulting apparent path length being on average about twice the length of the spiral magnetic field. The analysis indicates an increase in high-energy SEP events originating from the far-eastern solar hemisphere; for instance, such an event with a well-established associated GOES flare has so far occurred three times during cycle 24 but possibly not at all during cycle 23. The generally lower level of solar activity during cycle 24, as opposed to cycle 23, has probably caused a significant decrease in total ambient pressure in the interplanetary space, leading to a larger proportion of SEP-associated halo-type CMEs. Taken together, these observations point to a qualitative difference between the two solar cycles.