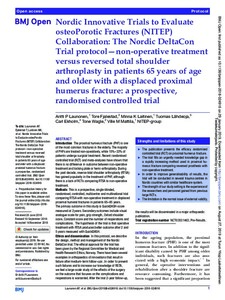 Introduction The proximal humerus fracture (PHF) is one of the most common fractures in the elderly. The majority of PHFs are treated non-operatively, while 15%-33% of patients undergo surgical treatment. Recent randomised controlled trial (RCT) and meta-analyses have shown that there is no difference in outcome between non-operative treatment and locking plate or hemi-arthroplasty. During the past decade, reverse total shoulder arthroplasty (RTSA) has gained popularity in the treatment of PHF, although there is a lack of RCTs comparing RTSA to non-operative treatment.Methods This is a prospective, single-blinded, randomised, controlled, multicentre and multinational trial comparing RTSA with non-operative treatment in displaced proximal humeral fractures in patients 65-85 years. The primary outcome in this study is QuickDASH-score measured at 2 years. Secondary outcomes include visual analogue scale for pain, grip strength, Oxford shoulder score, Constant score and the number of reoperations and complications. The hypothesis of the trial is that operative treatment with RTSA produces better outcome after 2 and 5 years measured with QuickDASH.Ethics and dissemination In this protocol, we describe the design, method and management of the Nordic DeltaCon trial. The ethical approval for the trial has been given by the Regional Committee for Medical and Health Research Ethics, Norway. There have been several examples in orthopaedics of innovations that result in failure after medium-term follow-ups. In order to prevent such failures and to increase our knowledge of RSTA, we feel a large-scale study of the effects of the surgery on the outcome that focuses on the complications and reoperations is warranted. After the trial 2-year follow-up, the results will be disseminated in a major orthopaedic publication.