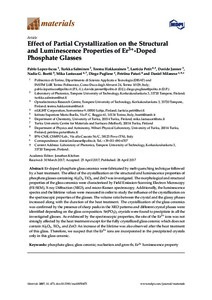 Er-doped phosphate glass ceramics were fabricated by melt-quenching technique followed by a heat treatment. The effect of the crystallization on the structural and luminescence properties of phosphate glasses containing Al2O3, TiO2, and ZnO was investigated. The morphological and structural properties of the glass ceramics were characterized by Field Emission-Scanning Electron Microscopy (FE-SEM), X-ray Diffraction (XRD), and micro-Raman spectroscopy. Additionally, the luminescence spectra and the lifetime values were measured in order to study the influence of the crystallization on the spectroscopic properties of the glasses. The volume ratio between the crystal and the glassy phases increased along with the duration of the heat treatment. The crystallization of the glass ceramics was confirmed by the presence of sharp peaks in the XRD patterns and different crystal phases were identified depending on the glass composition. Sr(PO3)(2) crystals were found to precipitate in all the investigated glasses. As evidenced by the spectroscopic properties, the site of the Er3+ ions was not strongly affected by the heat treatment except for the fully crystallized glass ceramic which does not contain Al2O3, TiO2, and ZnO. An increase of the lifetime was also observed after the heat treatment of this glass. Therefore, we suspect that the Er3+ ions are incorporated in the precipitated crystals only in this glass ceramic.