Plastic debris composition and concentration in the Arctic Ocean, the North Sea and the Baltic Sea

Plastic debris composition and concentration in the Arctic Ocean, the North Sea and the Baltic Sea 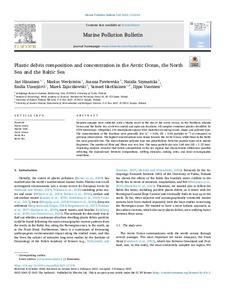 Neuston samples were collected with a Manta trawl in the rim of the Arctic Ocean, in the Northern Atlantic Ocean and the Baltic Sea at eleven coastal and open-sea locations. All samples contained plastics identified by FTIR microscopy. Altogether, 110 microplastics pieces were classified according to size, shape, and polymer type. The concentrations at the locations were generally low (x̅ = 0.06, SD ± 0.04 particles m−3) as compared to previous observations. The highest concentrations were found towards the Arctic Ocean, while those in the Baltic Sea were generally low. The most abundant polymer type was polyethylene. Detected particle types were mainly fragments. The number of films and fibers was very low. The mean particle size was 2.66 mm (SD ± 1.55 mm). Clustering analyses revealed that debris compositions in the sea regions had characteristic differences possibly reflecting the dependences between compositions, drifting distances, sinking rates, and local oceanographic conditions.