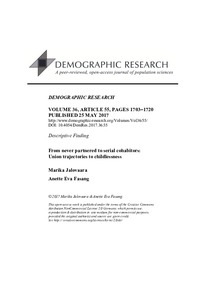 Background: Childlessness has increased in many European countries. Partnerships and parenthood are obviously closely related, but there is relatively little knowledge on how childlessness is linked to contemporary union dynamics that involve high rates of separation and unmarried cohabitation.

Objective: To situate (biological) childlessness in longitudinal dynamics of union formation and stability, we take a life-course approach to union trajectories that consist of states entered via the formation and dissolution of cohabitations and marriages. Concretely, we identify groups of similar union trajectories of individuals between the ages of 18 and 39 who are childless at age 42.

Methods: We analyse register data on Finnish men and women born in 1969 and 1970 (childless N=3,241) with sequence, cluster, and multinomial logistic regression methods.

Results: Four clusters of typical union trajectories were identified among the childless and assigned these labels: 1) Never Partnered (45%), characterized by never having entered a coresidential partnership, or just having entered a cohabitation near age 40; 2) Briefly Cohabited (25%), characterized by mostly living single after a brief cohabitation spell; 3) Cohabitors, Often Serial (19%), marked by typically discontinuous cohabitation; and 4) Married (11%). The Never-Partnered cluster is male-dominated. Men with a rural background and less-educated men and women are overrepresented among the Never-Partnered childless.

Conclusions: For the great majority of the childless in our study cohorts, union trajectories are marked by either the (almost) complete absence of coresidential unions or fragmentary cohabitation histories.

Contribution: The study contributes to the literature by showing that union histories, including never partnering as well as cohabitation instability, are key for understanding contemporary childlessness.