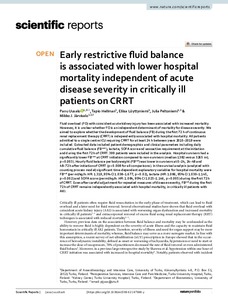 Fluid overload (FO) with coincident acute kidney injury has been associated with increased mortality. However, it is unclear whether FO is an independent determinant of mortality for disease severity. We aimed to explore whether the development of fluid balance (FB) during the first 72 h of continuous renal replacement therapy (CRRT) is independently associated with hospital mortality. All patients admitted to a single centre ICU requiring CRRT for at least 24 h between years 2010-2019 were included. Extracted data included patient demographics and clinical parameters including daily cumulative fluid balance (FBcum), lactate, SOFA score and vasoactive requirement at the initiation and during the first 72 h of CRRT. 399 patients were included in the analysis. Hospital survivors had a significantly lower FBcum at CRRT initiation compared to non-survivors (median 1382 versus 3265 ml; p = 0.003). Hourly fluid balance per bodyweight (FBnet) was lower in survivors at 0-24, 24-48 and 48-72 h after initiation of CRRT (p < 0.008 for all comparisons). In the survival analysis (analyzed with counting process model) significant time-dependent explanatory variables for hospital mortality were FBnet (per ml/kg/h: HR: 1.319, 95% CI 1.038-1.677, p = 0.02), lactate (HR: 1.086, 95% CI 1.030-1.145, p = 0.002) and SOFA score (per ml/kg/h: HR: 1.084, 95% CI 1.025-1.146, p = 0.005) during the first 72 h of CRRT. Even after careful adjustment for repeated measures of disease severity, FBnet during the first 72 h of CRRT remains independently associated with hospital mortality, in critically ill patients with AKI.