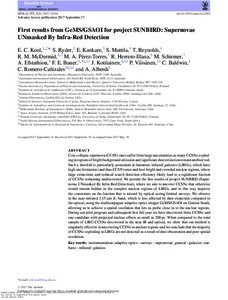 Core collapse supernova (CCSN) rates suffer from large uncertainties as many CCSNe exploding in regions of bright background emission and significant dust extinction remain unobserved. Such a shortfall is particularly prominent in luminous infrared galaxies (LIRGs), which have high star formation (and thus CCSN) rates and host bright and crowded nuclear regions, where large extinctions and reduced search detection efficiency likely lead to a significant fraction of CCSNe remaining undiscovered. We present the first results of project SUNBIRD (Supernovae UNmasked By Infra-Red Detection), where we aim to uncover CCSNe that otherwise would remain hidden in the complex nuclear regions of LIRGs, and in this way improve the constraints on the fraction that is missed by optical seeing-limited surveys. We observe in the near-infrared 2.15 mu m Ks-band, which is less affected by dust extinction compared to the optical, using the multiconjugate adaptive optics imager GeMS/GSAOI on Gemini South, allowing us to achieve a spatial resolution that lets us probe close in to the nuclear regions. During our pilot program and subsequent first full year we have discovered three CCSNe and one candidate with projected nuclear offsets as small as 200 pc. When compared to the total sample of LIRG CCSNe discovered in the near-IR and optical, we show that our method is singularly effective in uncovering CCSNe in nuclear regions and we conclude that the majority of CCSNe exploding in LIRGs are not detected as a result of dust obscuration and poor spatial resolution.