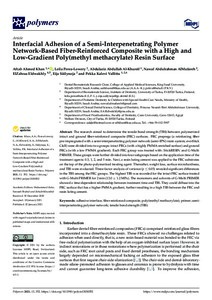 The research aimed to determine the tensile bond strength (TBS) between polymerized intact and ground fiber-reinforced composite (FRC) surfaces. FRC prepregs (a reinforcing fiber pre-impregnated with a semi-interpenetrating polymer network (semi-IPN) resin system; everStick C&B) were divided into two groups: intact FRCs (with a highly PMMA-enriched surface) and ground FRCs (with a low PMMA gradient). Each FRC group was treated with: StickRESIN and G-Multi PRIMER. These groups were further divided into four subgroups based on the application time of the treatment agents: 0.5, 1, 2, and 5 min. Next, a resin luting cement was applied to the FRC substrates on the top of the photo-polymerized treating agent. Thereafter, weight loss, surface microhardness, and TBS were evaluated. Three-factor analysis of variance (p <= 0.05) revealed significant differences in the TBS among the FRC groups. The highest TBS was recorded for the intact FRC surface treated with G-Multi PRIMER for 2 min (13.0 +/- 1.2 MPa). The monomers and solvents of G-Multi PRIMER showed a time-dependent relationship between treatment time and TBS. They could diffuse into the FRC surface that has a higher PMMA gradient, further resulting in a high TBS between the FRC and resin luting cement.